Poor Mother Hubbard. No wonder her cupboard was bare. When she got the bill for her kitchen cabinetry, she probably couldn’t afford to stock it with potatoes, much less bones for her dog.
If you’re planning to remodel your kitchen and want to upgrade to custom, handcrafted cabinetry, prepare for some sticker shock. Some luxury designers will casually tell you that it’s reasonable to spend six figures on kitchen cabinetry. And by the time they finish showing you the craftsmanship difference between an inset and overlay door and how to effectively hide your appliances by integrating them with fabulously lacquered or carefully stained woodwork, you might nod your head in rapt agreement.
But if you want to enjoy the beauty of high-quality kitchen cabinetry without sacrificing your children’s Ivy League college funds to pay for them, you can find relative bargains from craftsmen who pride themselves on making luxury cabinetry at affordable prices.
Here are six noteworthy designers whose kitchen cabinetry sells in the mid to high price range:

Christopher Peacock, whose early career as a drummer in a new-wave band didn’t make him famous, found name brand recognition in designing white kitchen cabinetry with chrome and silver hardware.
The lush paint and Gosford Park-like styling gave new kitchens an old look and “touched a nerve in a buying public that yearns for history and provenance,” says Penelope Green of The New York Times.
Peacock’s Scullery kitchen won House Beautiful’s coveted kitchen of the year award in 2008, and wealthy homeowners clamored for the “authenticity” of Peacock’s white kitchen cabinetry. First-time visitors to one of Peacock’s showrooms (located in Greenwich, San Francisco, New York, Chicago, Boston, Dallas, Orange County, Montreal and Cannes) may be surprised to find dark wood cabinets in his collections.
“Sometimes it’s more interesting to go with the darkness,” Peacock said about the design House Beautiful named kitchen of the year in 2013. He used quartersawn oak for the cabinetry and treated it with an ebony stain. He kept the design simple to keep the focus on the cabinet hardware, which features polished nickel handles shaped like luggage straps with a small insert of turquoise leather.
Peacock’s company does more than make cabinets. It also delivers and installs kitchens, mudrooms, bathrooms and wine-tasting rooms. 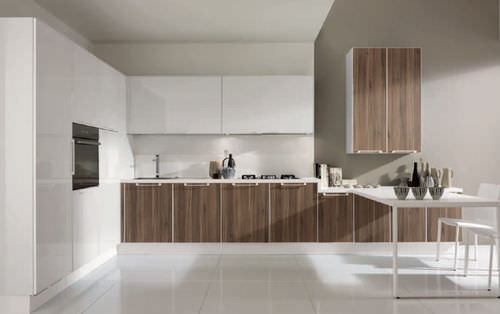 Sleek, simple and sophisticated designs are the hallmarks of Berloni’s kitchen cabinetry. The company has been making modular kitchens in Italy for more than 20 years and currently distributes its upscale kitchen pieces as well as bathroom and bedroom furniture through EuroAmerica dealers, located in 20 states.
Berloni says the company is committed to protecting the environment and carefully oversees the production of its cabinetry at its five facilities in the Pesaro furniture district to reduce the impact of toxic and hazardous substances.
Berloni’s laminated and lacquered doors come in neutral colors as well as vivid reds, purples and other attention-grabbing shades. 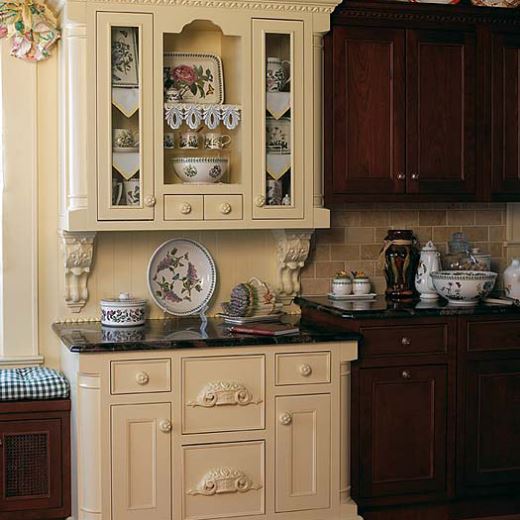 Plain and Fancy was founded in 1968 by a Pennsylvania hobbyist. John Acher liked making cabinets, some plain, some fancy and all of exceptional quality. The company was built on that premise and its reputation for fulfilling it helped Acher earn induction into the National Kitchen and Bath Hall of Fame in 2003. The NKBA lauded the Plain and Fancy founder for his development of “countless cabinets with innovative and exciting features from storage options to interior fittings while experimenting with new materials and finishes” as well as making custom kitchen cabinets affordable to most homeowners. The company’s designs have been featured in Kitchen and Bath Design News, House Beautiful and HGTV Remodel. 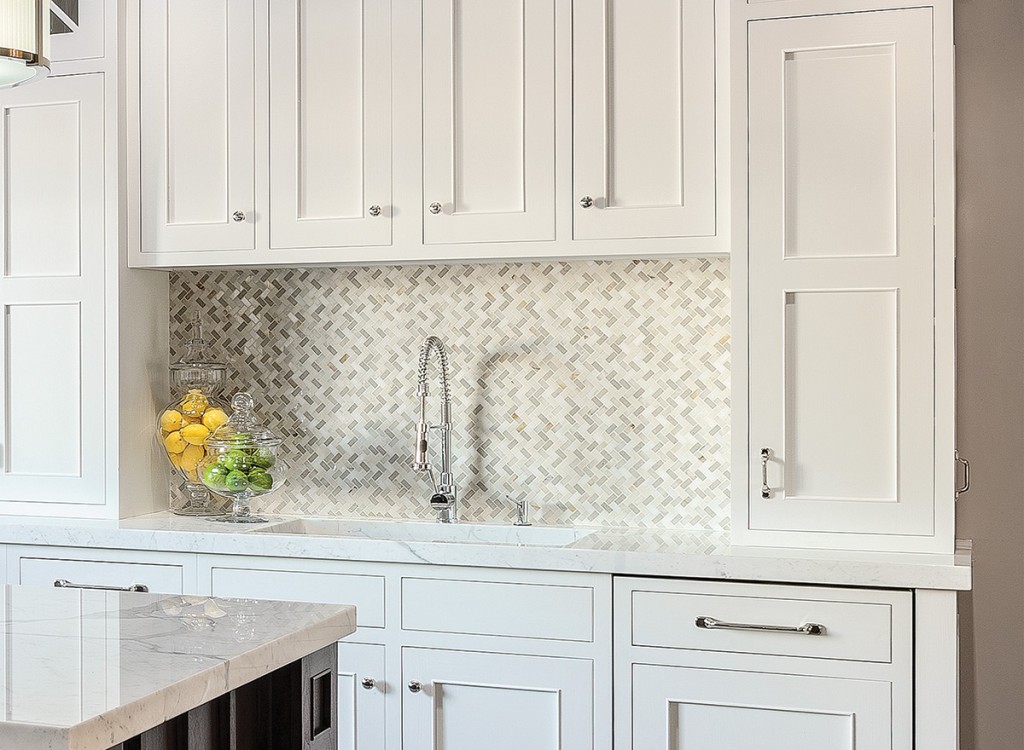 An example of the company’s “plain” work is a traditional/contemporary kitchen that features a 3” Austere finished inset door style with a custom white finish on the cabinets and a contrasting walnut island with a cocoa finish and Austere legs and back panel. It’s pretty without being fussy and looks as if it is meant to be used by busy homeowners.
The company goes fancy with a kitchen that includes an intricately detailed maple hutch, an appliqued vent hood over the stove, a fruit-basket back-splash and cherry wall cabinetry. It could make you feel as if you’re living in Dutch country a half century ago except that the dishwasher is cleverly disguised to look like part of the cabinetry.

Seven years before Acher turned his hobby into a business, another Pennsylvania man launched a custom cabinetry company inspired by the hand craftsmanship of the Amish and Mennonite communities. Phares Rutt started building custom kitchen cabinetry in 1958 and is now known as one of the leading manufacturers of custom cabinetry.
In October, Rutt introduced a Prairie series of kitchen cabinetry, its latest collaboration with designer Scott A. Stulz. The collection is a modern successor to the Ruskin traditional kitchen cabinetry Rutt and Stulz created in 2013.
Stulz said the Prairie series was inspired by the “20th century American architectural movement that included Frank Lloyd Wright, William L. Steele, and Fay Jones. Those involved sought to create a uniquely American style not modeled after European ideas… Crisp, clean, and freshly contemporary, it nonetheless is full of nuance and fine detail.”
“After the success of Ruskin which leans more traditional, we felt it was important to turn our next efforts to a more contemporary aesthetic, and the bar was set high,” states David Roos, VP of Sales & Marketing for Rutt. “We are extremely pleased with how quickly the new Prairie series has been embraced by our dealers and their designers.”
The Ruskin series, named for architect John Ruskin, leans toward the traditional. An island and dining buffet, for example, is made of Oxford-stained walnut and the details are reminiscent of mid-20th-century design. 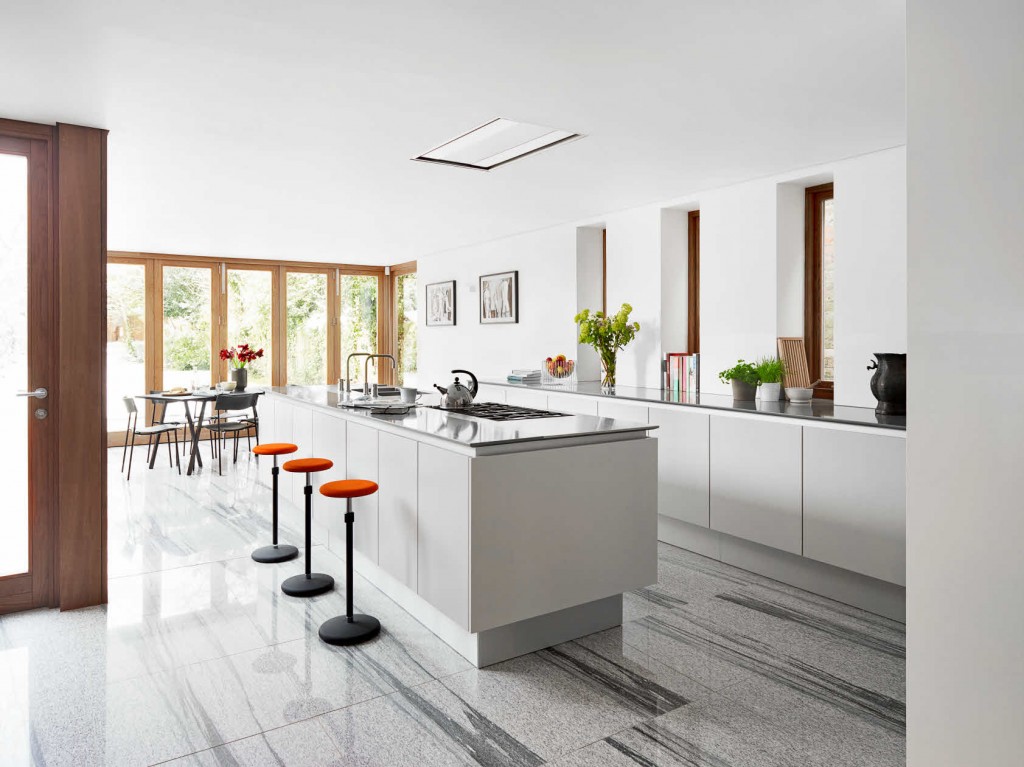 If quality and prestige are important to you – and your budget is expansive – you may consider investing in Poggenpohl kitchen cabinetry. Poggenpohl kitchens have been installed in a $37.5 million condo in Boston, a restored Victorian in Washington, D.C.’s Logan Circle and other fine homes and developments in more than 70 countries.
“Every cabinet, cupboard and worktop that leaves the Poggenpohl factory in Herford, Germany has someone’s name on it, because every Poggenpohl kitchen is made to measure for a specific customer,” according to the company’s website.
Poggenpohl created a contemporary kitchen in a 150-year-old London home. One of the greatest installation challenges, according to the company’s magazine, was the island worktop.
“This combines two materials along its length – Quarella composite and welded stainless steel – demanding a perfect flush fit between the two. A second run of cabinets extends along an opposite wall which features four windows. The worktop had to be precisely cut to fit inside each window reveal, with no room for error.”
To keep the look uncluttered Poggenpohl designed tambour units above the worktops so that items such as a toaster and kettle could be tucked away when not in use. Poggenpohl caters to customers with very specific needs and tastes.
“Poggenpohl created an efficient layout and because they make everything to order, their cabinets fit the space exactly. If you have a cupboard that needs to be precisely 456 millimetres wide, they will make that. So you can have exactly what you want, exactly as you want it,” the owner of the London home said. 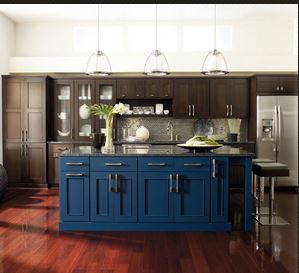 Omega got its start in rural Iowa in 1977. The company’s headquarters is no longer a barn and Omega is now a subsidiary of MasterBrand Cabinets, located in Indiana. But, the company says, its tradition of using hand-selected woods, top-of-the-line hardware and hand-applied techniques remains unchanged. The company appeals to a diverse range of tastes – casual, contemporary, rustic and traditional.
The company’s rustic collection, for example, features cherry wood in a sage finish and its contemporary collection includes a blue kitchen island with a choice of sleek or antique-style cabinet hardware options.

There are so many talented kitchen cabinetry designers that we struggled to narrow our list to a half dozen. Was your favorite designer included? If not, please nominate someone for a future blog. Or post a Revuu about a line of kitchen cabinetry you adore or one that doesn’t live up to its hype.

No responses / comments so far.

We pick up where Consumer Reports and Yelp leave off. Join today to find and leave reviews of your favorite luxury home products and appliances!